SSFL Is Truckin’ in Style Thanks to Ludwick Foundation 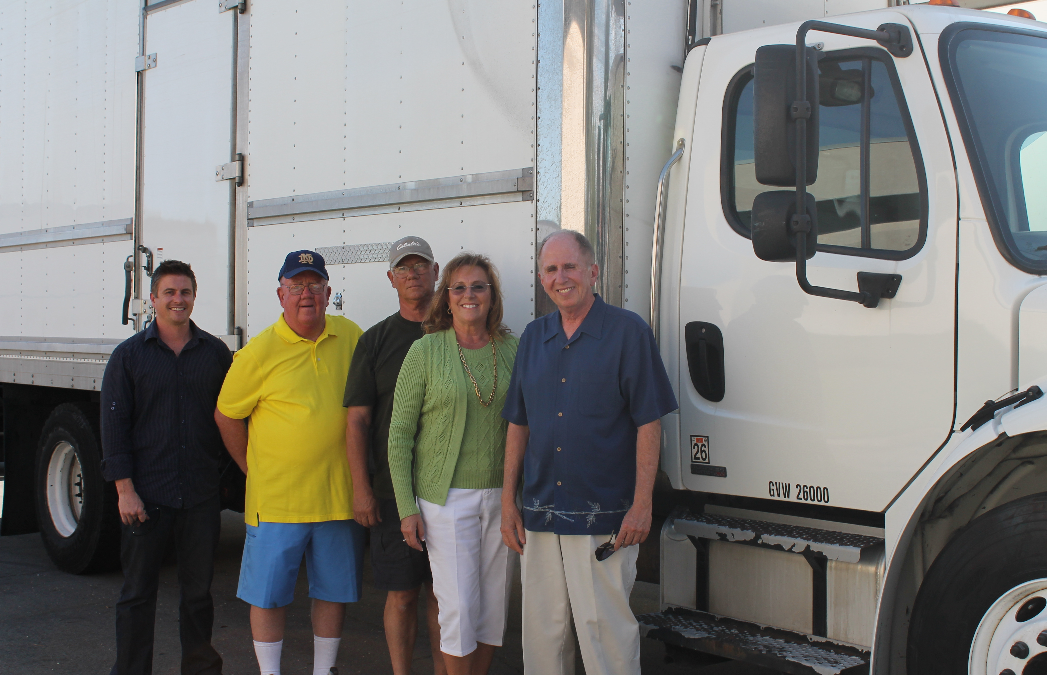 Sowing Seeds for Life will soon be truckin’ in style, thanks in part to a $53,000 grant from the Ludwick Family Foundation of Glendora.

SSFL volunteer Jim O’Brien of San Dimas, a retired West Covina police officer, did all the leg work and negotiations in acquiring a 2007 Freightliner bobtail truck from Penske Truck Sales.

The 26,000-pound vehicle with a 24-foot refrigeration unit will be put in use as soon as it passes exhaust an emission test and is equipped with a security system.  Also, the truck will be getting a Sowing Seeds for Life logo that will include the charity’s phone number (909 392-5777) and website (www.sowingseedsforlife.org).

Although a fairly large truck, it can be operated by anyone with a regular Class A driver’s license.  The cut-off point is 26,000 pounds.  Anything larger than that requires a Class C license.

The purchase of the truck, which cost $32,250 and came with a two-year warranty, would not have been possible without the grant from the Ludwick Foundation.

The grant also covered the cost of a forklift, two giant freezers and one cooler.

Founded in 1990 by Arthur and Sarah Ludwick, the Ludwick Family Foundation is a philanthropic organization committed to assisting a broad array of groups that are working to make a positive difference in the world.

After the Ludwick Family Foundation board approved the grant in October 2012, Vicki Brown, the founder and CEO of the regional food bank, worked out the details to qualify with Trista Campbell, the foundation’s program officer.

“The grant that allowed us to acquire this truck means the world to Sowing Seeds for Life,” said Brown. “We can do so much more in accomplishing our mission of providing food, particularly fresher perishable items, and valuable and needed services to those in need in our area without the cost of continually having to rent trucks.”

Sowing Seeds for Life, founded in 2007, services some 6,000 people per month in the East San Gabriel Valley and Inland Empire.  The charity does this mainly through its food pantry giveaways the first and third Wednesdays of every month at the DPI Labs parking lot at 1350 Arrow Highway in La Verne.

Sowing Seeds also puts on food pantries at various satellite locations, an aspect that now will be increased with the arrival of the truck.

“We’ll be able to better our delivery program where we go out into the surrounding communities, making it easier for us to provide fresh produce and perishables, along with breads and canned foods delivered, to other charitable entities that have teams with SSFL,” Brown said.

“This means increasing the number of people we serve while also reducing the size of the line at our main pantries at DPI.  Another plus is we will be reducing the distance that our clients have to drive.”

The new truck will soon be put to good use. First, there is SSFL’s sixth annual SSFL: “Christmas in the Park” food and toy giveaway to be held at Ganisha Park in Pomona on Dec. 14 (noon to 4 p.m.). SSFL is also a major contributor to Threshold Aviation’s “Christmas in the Hangar” at Chino Airport, which this year it will be held Dec. 22 (11:30 a.m. to 2:30 p.m.). An estimated 3,000 people were served at this event last year.

“The new truck will help us with moving all the food and produce,” Brown said.