SSFL Is Truckin’ in Style Thanks to Ludwick Foundation

For one thing, the Glendora resident continues to run DPI Labs, the La Verne aerospace manufacturing company for which she serves as CEO and president.

For another – and this is a big another – Vicki has been piloting her non-profit charitable organization, Sowing Seeds for Life, as it provides food and services to needy families and toys to children during this holiday season. 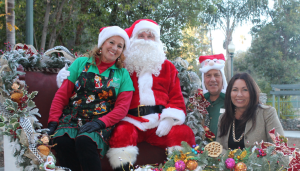 Vicki founded Sowing Seeds for Life in 2007 and since then has served as its CEO while it has grown into one of the most significant charities of its kind in the East San Gabriel Valley. It provides food and services to some 6,000 people per month.       Sowing Seeds for Life’s biggest giveaway event of the year, “Christmas in the Park,” took place Dec. 14 at Ganesha Park in Pomona. Hundreds of children received free toys and a photo with Santa Claus, and adult family members got canned goods and non-perishable food items and more.

As if organizing the “Christmas in the Park” wasn’t enough for Vicki Brown and her band of wonderful volunteers, four days later on Dec. 18 came one of Sowing Seeds for Life’s regularly scheduled twice-a-month food pantries at DPI Labs, 1350 Arrow Highway.  This pantry also featured another toy giveaway and photos with Santa for the children.

On Saturday, Dec. 21, Vicki hosted a huge Christmas party for Sowing Seeds for Life volunteers and other friends at her beautiful hillside Glendora home.

She wasn’t done yet. The next day was Threshold Aviation’s annual “Christmas in the Hangar” at Chino Airport. Sowing Seeds for Life is a major contributor to this event which attracts some 3,000 people.

Sowing Seeds for Life’s “Christmas in the Park” drew more than 1,000 people, down a little from previous years. That could be an indication that our economy is improving ever so slightly.

But it was still a major undertaking – and proved to be a major event. It attracted Pomona Mayor Elliott Rothman and City Council member Debra Martin, who also got a picture with Santa Claus and Vicki Brown.

Rothman, who has attended the event in the past as well, praised Vicki for all she does and offered the City of Pomona’s assistance in any way possible. Most of the people attending were from Pomona.

A highlight of the event was an excellent lineup of entertainment arranged by SSFL volunteer Paulette Young, with assistance from Regina Jordon-Young of the Diamond Love Foundation, Rick Barry, Mr. Smooth Jazz from radio station 89.5 FM who also served as the emcee, Selena Lindsey, and country music singer James Bonner, who also performed.

The show took place on the outdoor amphitheater adjacent to the food pantry and toy giveaway, and the list of entertainers was a long and impressive one. Such a show would normally require a $100 ticket, or something close to that. But his show was free, thanks to Sowing Seeds for Life.

–Performances by the Barstow Academy of Dance, consisting of a number of young ladies and their leader, Christen Ellis.

–The incredible singing voice of Britney Young, returning for fifth to perform Christmas songs and joining Christen Irving for a gospel music duet. Britney is one of Paulette’s daughter.

–A solo performance by Christen Irving, whose stage name is name Ashley Daniels. She boomed out Christmas songs and gospel, captivating the crowd.

–An amazing performance by 2 U Neek, which consists of twins Ashley and Ashton Ruiz. The twins, who also performed at last year’s “Christmas in the Park,” recently recorded a single called “Out of Control” and has an album coming out this spring. They have been booked as a warm-up act for the likes of the Jonas Brothers, Beyonce, Robin Thicke and others and have recently co-authored a children’s book titled “The Adventure of Peni and Keni.”

There was more to the event than the food pantry, the toy giveaway, the photos with Santa and the entertainment gala.

Girl Scout Cadettes Danae Hollar and Michelle Boulware of La Verne Troup 3094 were there along with their mothers to hand out tie blankets created by Danae. It was a project that allowed Danae to earn her Silver Award, the highest honor for a Girl Scout Cadette. Danae and Michelle are eighth graders at Ramona Middle School in La Verne.

Candance Smith and Michele Toral, representing area Options For Youth charter schools set up a booth where they handed out candy canes, water, and pens and pencils as a way to generate interest in their schools.

“I certainly don’t deserve all the credit for this wonderful event,” says Vicki Brown modestly. “It could never happen without the help from all the volunteers.”

And it showed there really is a Santa Claus – and a Mrs. Claus (Vicki Brown) surrounded by a community of Santa helpers.

Vicki sums it up this way: “It’s all about the Christmas spirit, the gift of love, and joy and peace.”