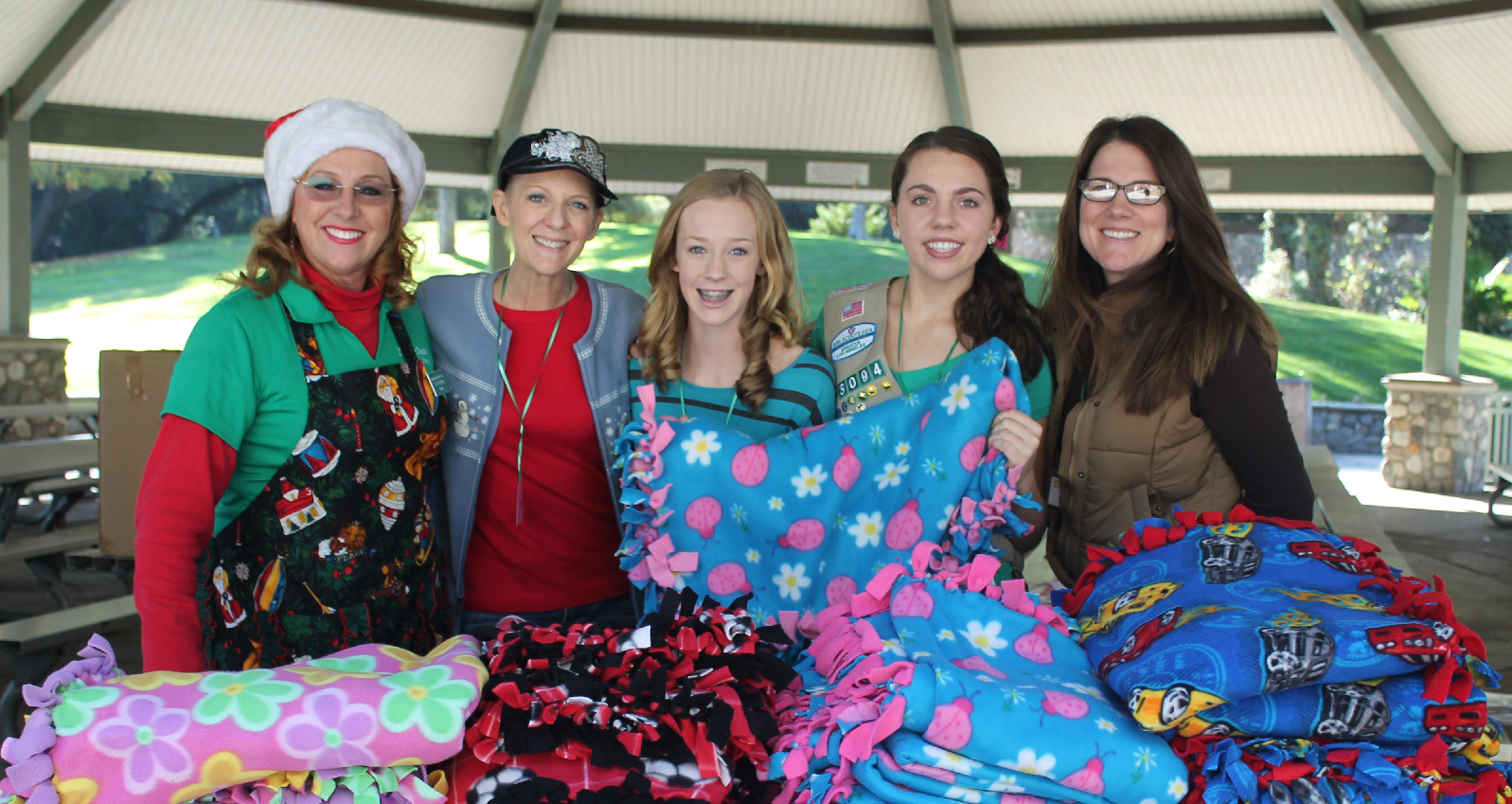 Vicki Brown with Sandy Boulware, Michelle Boulware, Danae Hollar and Lori Hollar. Danae made 30 tie blankets to hand out as part of a Girl Scout project.

You’ve got to hand it 14-year-old Denae Hollar. That’s because she handed out 30 beautiful hand-crafted tie blankets to those in need of something warm and fuzzy at the sixth annual Sowing Seeds for Life “Christmas in the Park” toy giveaway and food pantry held on Saturday, Dec. 14, at Ganesha Park in Pomona.

If young Denae Hollar continues in scouting, she’s going to be hard-pressed to come up with a project that tops what she did for her Silver Award. She knew that in order to earn that award, she must engage in a project that would benefit those in her community.  She came through with flying colors – literally.

She spent 40-plus hours creating the colorful tie blankets that she handed out at Saturday at Ganesha Park. The blankets, consisting of two kinds of fabric, had to be cut so that ties could be created around them.

“Each blanket took about an hour and a half to do,” Denae said.

The Sowing Seeds for Life event was the perfect place to Denae to conclude her project. She and her friend from Troop No. 3094, Michelle Boulware, with help from their moms, set up a booth that became very popular during the event.

Michelle’s older sister Rachel, a senior at Bonita High, also worked the event as a volunteer, helping hand out the toys.

Sowing Seeds for Life is a La Verne-based charity founded by Vicki Brown, the CEO of DPI Labs, located at 1350 Arrow Highway. SSFL, as it is known for short, provides food and services to some 6,000 people per month, mainly through twice-a-month food pantries. They are held the first and third Wednesday of every month in the DPI Labs parking lot.

The charity’s annual “Christmas in the Park” event is one of its biggest functions of the year, as hundreds of children and their families show up to get a free toy and a photo with Santa Claus. The event also includes a food pantry that offers mostly non-perishable items, plus an impressive lineup of entertainment.

This year’s event was another successful one, despite a wardrobe malfunction of some sort for Santa. It caused a considerable delay and some anxious moments, but at least he didn’t have to go all the way to the North Pole to rectify the situation.

The presence of the two city officials is further proof of the growing stature of Sowing Seeds for Life, as it has grown from a small vegetable garden planted by Vicki Brown at her home in Glendora in 2007 to what it is today.

And with young people like Denae Hollar and the Boulware sisters getting involved, plus all the hard work put in Vicki Brown and her band of giving volunteers, SSFL figures to continue to grow and show that the city of La Verne is a giving place.