Tax Benefits For Your Company 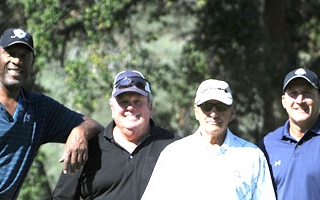 On Thursday, September 22, 2011, we hosted our third annual Sowing Seeds For Life Charity Golf Tournament. This fabulous event include lunch, dinner, player’s gifts, auction, raffle, and a super scramble golf tournament with over 100 golfers, live entertainment before and after golf, a helicopter golf ball drop cash raffle, a star-studded celebrity sports panel and much, much more!

The 2012 tournament will be held Monday, Oct. 8, at Glendora Country Club. Normally, the entry fee for such a tournament would be at least $500. But for the bargain price of $200 ($750 for a foursome), you too can rub shoulders with sports celebrities and, following tournament play, can also hear them be interviewed by a veteran sports journalist. You’ll have lots of amazing stories to tell your friends.

In 2010, West, Worthy, Harrick and Russell sat down for a 40-minute sports panel discussion conducted by Dwyre and captivated the audience. You could hear a pin drop.

The panel discussion went on and on, and at one point Dwyre asked tournament coordinator Tim Haas if he should wrap things up. “No, no,” Haas said. “You can go on forever.” The audience, hanging on every word, applauded. They wanted more.

Haas later told the audience, “I’ve been involved with charity golf tournament for more than 25 years. You’d be lucky to find one in 500 like this one.”

Another positive about this tournament is the charity it benefits. Sowing Seed Life is a non-profit that provides food for people in difficult situations. Sowing Seeds for Life

(SSFL) began distributing food in December 2007 to some 100 people a month in the La Verne area and now serves more than 6,000 a month.

The driving force behind Sowing Seeds and the tournament is Vicki Brown, the charity’s CEO as well as the CEO of DPI Labs, a prominent multimillion La Verne aerospace company. Brown will be honored at this year’s tournament for all she has done for the community. Brown literally planted the seeds that grew the charity and the tournament. Sowing Seeds For Life started out as a backyard garden project. “I’m just proud to be the one who watches all this happen,” she says modestly.

It is her hard work and dedication and her connections to the right people that has enabled her to accomplish so much. She is the one who assembled an energetic tournament committee headed by co-chairmen Tim Grant and Al Snow. Another key member is Greg DeSmet, the founder of DPI Labs.

Even non-golfers can contribute by being an event sponsor, by purchasiing a tee or green sign, making a donation, donating a raffle or auction prize, or by purchasing a helicopter golf ball drop ticket,” he said.

At least a portion of most donations is tax deductible.