The fifth annual Sowing Seeds for Life Golf Tournament for Charity is now in the books, and with an impressive list of celebrities and a record 110 golfers taking part, it was the most successful one of the five.

And how fitting it was to have three members of the legendary Dodger infield of the 1970s and early ’80s — Garvey, Russell and Cey – taking part on the same day that the current Dodgers would later advance to the National League Championship Series by defeating the Atlanta Braves, 4-3.

Davey Lopes, the other member of that infield, was unavailable because he is a coach for the Dodgers.

Garvey was originally planning to play in the tournament but had to leave for that evening’s game because he was part of a pregame ceremony also involving former Dodgers Eric Karros and Steve Yeager. Cey also had to be at the game because he works for the Dodgers in community relations, but he was not going to play anyway because he is not a golfer.

The evening program at the SSFL tournament featured a live auction with Glendora resident Chris Roberts, the radio voice of UCLA football and basketball, serving as auctioneer, and a sports panel roundtable moderated by Bill Dwyre of San Dimas, the former sports editor of the Los Angeles Times who is now a columnist for that newspaper. 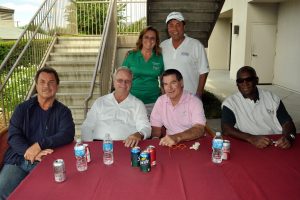 Such a panel has become a trademark of the SSFL tournament and has featured such sports legends as Jerry West, James Worthy, Jim Harrick, Trevor Denman, Laker assistant coach Frank Hamblen and many more in the past. However last year, instead of a sports roundtable, Roy Firestone entertained and Hall of Fame announcer Bob Miller of the Los Angeles Kings announcer was the featured guest.

This year former UCLA football coach Terry Donahue had originally agreed to be on the panel but had to drop out because of a business obligation. But he did take tournament co-chairmen Tim Grant and Al Snow to lunch near his home in Newport Beach on Oct. 2. Grant, a 1982 graduate of UCLA, was the tournament honoree this year.

The privilege of playing in a foursome with either Garvey or Russell was auctioned off prior to the tournament. Dane Johnson, an associate pastor at the Christ Church of the Valley in San Dimas, and San Dimas businessman Leo Wills had the winning bids.

Since Garvey was unable to play on Oct. 7, he arranged for Johnson and two friends to play with him at his club, the Indian Wells Country Club, in January.

Other sports celebrities who did play in the tournament included former USC and Buffalo Bills cornerback Chris Hale and former Long Beach State basketball star Ed Ratleff, a two-time All-American who played for the Houston Rockets for six seasons.

James Washington, former UCLA, Los Angeles Ram and Dallas Cowboy safety, did not play golf but attended the dinner.  Washington has his own foundation, Shelter 37 (so named because 37 was his football jersey number). That foundation, like SSFL, serves the needy in variety of ways.

The live auction was highlighted by the auctioning off a Dodger package that includes a visit with Vin Scully in his broadcast booth at Dodger Stadium. Another exclusive package that was auctioned off was a visit to the Fox studio set during that network’s NFL pregame show and a chance to mingle with Terry Bradshaw and company. Another auction item was a visit to horse racing announcer Trevor Denman’s booth at Santa Anita.

The day got off to a great start with the the presence of Garvey, Russell, Cey and Downing.

Downing may be best known for giving up Hank Aaron’s record-breaking 715th home run in 1974 as a Dodger, but he great major league career. Some of his best seasons were with the New York Yankees from 1961-70.

The infield of Garvey, Lopes, Russell and Cey were together from June 23, 1973 until 1981, when the season ended with the Dodgers beating the New York Yankees in Game 6 of the World Series. Cey shared World Series MVP honors with teammates Steve Yeager and Pedro Guerrero.

During their years together, Garvey, Lopes, Russell and Cey were responsible for four pennants, one title, 21 All-Star appearances, five Gold Gloves, a National League MVP, an NL Championship Series MVP and that share of the 1981 World Series MVP.

Sowing Seeds for Life, is a 501 © (3) non-profit that directly provides food, water, personal-car items and social services to some 6,000 needy people per month in the East San Gabriel Valley.

The driving force behind the charity and the tournament is Vicki Brown of Glendora, who besides being the founder and CEO of Sowing Seeds for Life is also the CEO of DPI Labs, a prominent La Verne aerospace manufacturing company. Vicki literally planted the seeds that grew the charity and the tournament. Sowing Seeds for Life started out as a backyard garden project. “I’m just proud to be the one who watches all this happen,” she says modestly.

The tournament’s title sponsor is the Feinberg Shuler Group, a wealth management firm in Woodland Hills affiliated with Morgan Stanley Smith Barney and headed by Joseph Feinberg, Dan Shuler and Tamara Stein. Feinberg is also affiliated with the Feinberg Foundation of Chicago, which among other things funded the Feinberg School of Medicine at Northwestern University. Joe, Dan and Tamara are pictured with Vicki and tournament honoree Tim Grant above. And Vicki and Joe are also in the picture with the four Dodger legends.

The cost of playing in this tournament, enjoying a steak dinner with table service and listening to a fascinating sports roundtable discussion was only $200 per player or $750 per foursome.

It’s a pretty safe assumption to say everyone got their money’s worth.